Kick off meeting of the LIFE BATTLECO2 project 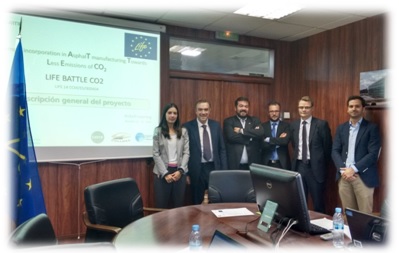 Last 2 of October of 2015 took place at the CARTIF installations at the Boecillo Technology Park (Valladolid), the kick off meeting of the LIFE BATTLE CO2 project.

The project (Biomass incorporation in asphalt manufacturing towards less emissions of CO2) its in the frameqork of the Climate Change mitigation typology and has been financed by the European Commission in the LIFE 2014 call for proposals.

The consortium of the project its formed by CARTIF Foundation as coordinator, the construction company COLLOSA and the Technologic Road Platform (PTC).

During the kick off meeting the general lines of the project were addressed, focused to the substitution of the use of fossil fuels in the agglomerate manufacturing plant, incorporating biomass as an alternative fuel in a pioneer action at the sector.

In addition to the assistance of the project partners, was attended by the presence of María José Alonso Moya, of the Spanish Office of the Climate Change of the agrifood and Environment Minsitery (MAGRAMA), that together with other experts in the sector such as Juna José Potti Cuervo, of the Spanish Assocition of Asphalt mixes manufacturers (ASEFMA), collaborate as assesores in the LIFE BATTLE CO2 project.