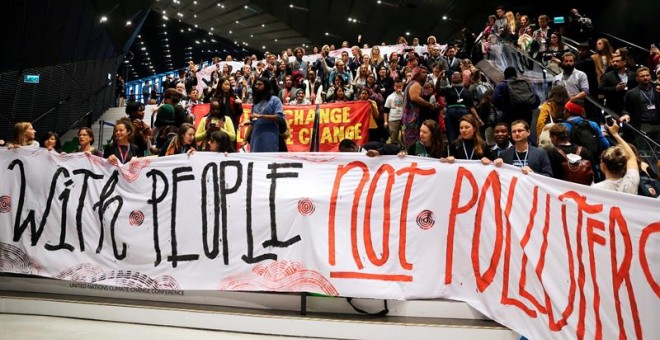 After two long weeks of debate, the Climate Summit (COP24) in Katowice, Poland, has sealed minimum agreements that allow the Paris Agreement to be applied. The result of the meeting, born after an extra day of meetings, has placed on the table the prevailing needs to increase aid and controls to ensure an effective fight against climate change.

The final agreement includes a reference to the scientific report that appeals to the importance of undertaking “urgent and unprecedented” changes to limit the increase in the temperature of the planet to 1.5 degrees, after a great controversy that threatened to thwart the summit. Teresa Ribero, Spanish Minister for the Ecological Transition has valued the COP24 of Katowice in a positive way and has explained that its result “makes the Paris Agreement operational”.

However, beyond the book of rules, hardly have been able to start effective commitments that ensure that the countries enrolled in the agreement begin to fight against the climate crisis. In fact, the text has failed to meet the demands of environmental groups, which called for an increase in ambition to ensure that political actions are framed within the scientific indications to combat climate change. So much so, that the negative reactions have not been slow to come to the fore since the end of the COP24 of Katowice.

The Equo MEP in the Greens / ALE group, Florent Marcellesi, has shown his “disappointment” at the outcome of these marathon negotiations. “Decisions and climate action of governments are increasingly away from citizen demands and scientific analysis,” he explained. The Equo politician says that, although some progress has been made, it can not be said that the result has a “high ambition aligned with the report of international scientists” capable of guaranteeing “a better climate and great economic opportunities with millions of jobs quality”.

“The European Union has its share of responsibility for the weakness of the result, with the departure of the US from the Paris Agreement and the blockade of countries like Saudi Arabia and Brazil, the EU is the only one that could advance the negotiations against climate trumpism Unfortunately, although Spain has played a positive role in this climate summit, most European governments have not shown enough ambition, “said Marcellesi.

From Ecologists in Action, they express their dissatisfaction with the result of the summit, which “weakens the Paris Agreement” and converts the obligations to curb the effects of climate change in “mere suggestions”. The organization points out the obstacles that the big oil powers like the US and Saudi Arabia have put in place during the two weeks of debate, questioning the report of the Intergovernmental Panel on Climate Change (IPCC), which indicates that there is barely enough time left – twelve years – for curb greenhouse gas emissions.

“The final formulation of the text simply encourages countries to take into account the results of the report and eliminates the previous text that made a numerical reference around the necessary reductions”, says the person in charge of Climate of Ecologists in Action, Javier Andaluz.

For his part, the spokesman of climate change of the World Wide Fund for Nature (WWF), Manuel Pulgar, comments that “what we have voiced in Poland reveals a lack of fundamental understanding on the part of some countries of the current crisis”.

For Greenpeace, the Katowice agreement knows little about “the need for more ambitious and urgent action, especially after the clear evidence that has come from the scientific community.” The environmental organization questions the “lack of leadership of the Polish presidency (of the summit)”, since the negotiation had to be finally “saved” by the negotiators of the United Nations.

Against the assessments of the environmental groups attending the summit, the Secretary General of the United Nations, Antonio Guterres, appreciates that the result “demonstrates the resistance of the Paris Agreement as a road map for climate action.”