Kick off meeting of climate change mitigation projects in Brussels 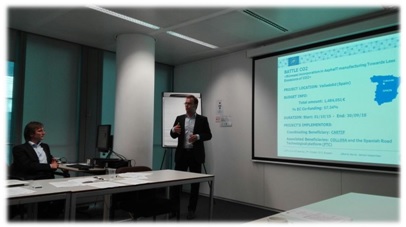 The Executive Agency for Small and Medium Sized Enterprises (EASME) of the European Commision celebrated the last 29 of October of 2015 in Brussels the oficial kick off meeting of all the projects approved in the LIFE 2014 call for proposals, in the subprogramme of Climate Change Mitigation in the energy, transport and industry sectors. LIFE BATTLE CO2 project was there.

In the framework of this conference, CARTIF, that was there as coordinator of the new project LIFE BATTLE CO2 representing also the partners of the project COLLOSA and Technology Road Platform, was invited to make a talk about the main challenges to which a coordinator of a LIFE project faces.

The conference facilityates also the meeting of several projects that centralized theri efforts in the Climate Change Mitigation through different actions in different industrial sectors.