Europe sets the target of renewable energies at 27% by 2030 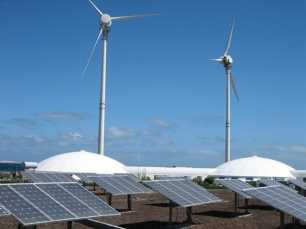 The Twenty-eight have reached an agreement on their negotiating position to update the European renewable energy directive and to open negotiations as soon as possible with the European Parliament as soon as it approves its negotiation proposal. However, the Environment Commission of the Eurochambres demanded in October raise the percentage to at least 35%.

The Ministers of Energy of the Twenty-eight have agreed on Monday a target of at least 27% renewable energy in the final energy consumption by 2030 and have agreed to maintain the current limit of 7% of first generation biofuels in the sector of the transportation.

The regulations currently in force aim to achieve a renewable share of 20% on final energy consumption in the EU block by 2020.

The European Commission has proposed raising the renewable target to 20% by 20%, although the Commissioner of Energy and Climate Action, Miguel Arias Cañete, has assured that raising it to 30% because it would have “the same cost”.

The energy ministers have also agreed to set a 14% renewables quota in each country for the transport sector and a 3% target for advanced or second generation biofuels – produced from non-food biomass – which will compute the double to reach the objective, that is to say that 3% would be reached with a 1.5%.

There will be a “binding” intermediate target of 1% for second-generation biofuels in 2025 with the aim of increasing security in investments and guaranteeing their availability.

In contrast, the Twenty-eight have agreed to maintain the current limit of 7% of the use of first-generation biofuels in the transport sector to ensure the certainty to investors, although countries such as France and Luxembourg have asked to revise it downwards in 2025.

Luxembourg called for a target “equivalent” to 7% in the case of advanced biofuels, while Hungary and Poland rejected a binding target for second generation biofuels.

With regard to biofuels, the Environment Commission of the European Parliament has proposed a progressive elimination of those that are based on crops for 2030 and since 2021 for those produced from palm oil.

However, those countries that want to set a stricter limit – the Commission proposed to reduce them to 3.8% – will be rewarded with the option of reducing their overall target of renewables in the transport sector, according to the agreement reached by the Council.

Belgium, for example, considered “difficult” to reach the objective of sector 14% in the transport sector but asked for more ambition in biofuels, while Finland, Sweden, France and Luxembourg claimed to raise it to 15% and Italy to 18% and, instead, Countries such as the Czech Republic, Cyprus and Croatia saw 14% excessive and asked to limit it to 12%.

The Twenty-eight have also agreed to a 1% annual increase in the share of renewable energy in the heating and air conditioning systems, although the differences between existing systems will be taken into account, especially the specific characteristics of the air conditioning installations in the countries with a warmer climate.

The norms also clearly establish the rights and obligations for the self-consumption of renewable energies and energy communities.

The European governments have maintained in their agreement the Commission’s proposal to avoid “unjustified” retroactive changes in the systems of renewable aids in order to guarantee financial stability and certainty for investors.

In addition, they may open their national aid systems to renewable energy suppliers in other Member States if they so decide.

The renewable energy directive is part of the broader Clean Energy regulatory package presented by the European Commission in November 2016 to help meet climate objectives, which must be negotiated with the European Parliament.