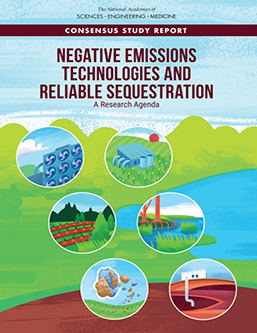 The National Academy of Sciences, Engineering, and Medicine report Negative Emissions Technologies and Reliable Sequestration: A Research Agenda assesses the benefits, risks, and «sustainable scale potential» for «negative emissiones technologies» (NETs) and sequestration. This report also defines the essential components of a research and development program, including its estimated costs and potential impact.

Recent analyses found that deploying NETs may be less expensive and less disruptive than reducing some emissions, such as a substantial portion of agricultural and land-use emissions and some transportation emissions. For example, combustion of a gallon of gasoline releases approximately 10 kilograms (kg) of carbon dioxide in the atmosphere. Capturing 10kg of carbon dioxide from the atmosphere and permanently sequestering it using a NET has the same effect on atmospheric carbon dioxide as any mitigation method that simultaneously prevents a galloon of gasoline combustion.

This website uses cookies to improve your experience while you navigate through the website. Out of these, the cookies that are categorized as necessary are stored on your browser as they are essential for the working of basic functionalities of the website. We also use third-party cookies that help us analyze and understand how you use this website. These cookies will be stored in your browser only with your consent. You also have the option to opt-out of these cookies. But opting out of some of these cookies may affect your browsing experience.
Necessary Siempre activado
Necessary cookies are absolutely essential for the website to function properly. These cookies ensure basic functionalities and security features of the website, anonymously.
Functional
Functional cookies help to perform certain functionalities like sharing the content of the website on social media platforms, collect feedbacks, and other third-party features.
Performance
Performance cookies are used to understand and analyze the key performance indexes of the website which helps in delivering a better user experience for the visitors.
Analytics
Analytical cookies are used to understand how visitors interact with the website. These cookies help provide information on metrics the number of visitors, bounce rate, traffic source, etc.
Advertisement
Advertisement cookies are used to provide visitors with relevant ads and marketing campaigns. These cookies track visitors across websites and collect information to provide customized ads.
Others
Other uncategorized cookies are those that are being analyzed and have not been classified into a category as yet.
GUARDAR Y ACEPTAR